We’re honored to have been featured in the Bend Source! Take a peek at their article on growing high desert greenhouses here.

A permaculture farm on Hunnel Road demonstrates the abundance that can happen, even in the High Desert

“My wish is for every home in Bend to grow their own food.”

A dream? Not in the mind of Shiv Shakti, an optimist transforming 10 acres of the High Desert into a permaculture paradise. 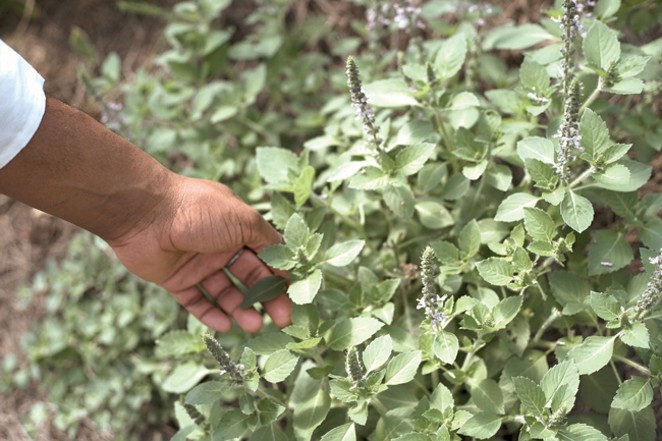 In the local news the words “Hunnel Road” often conjure ideas of homelessness and dilapidated RVs, but after the dead end, the notorious road picks up again a bit farther north and leads to the oasis known as Shakti Farm Design.

Shakti began his journey in Bend leading meditations—a practice he still continues at the Hanai Center every Thursday. During COVID, the lockdowns gave most people lots of free time. Rather than catch up on Netflix shows, Shakti chose to create a sustainable farm in the High Desert, not the easiest task as those who have tried to grow in Central Oregon unfortunately know. 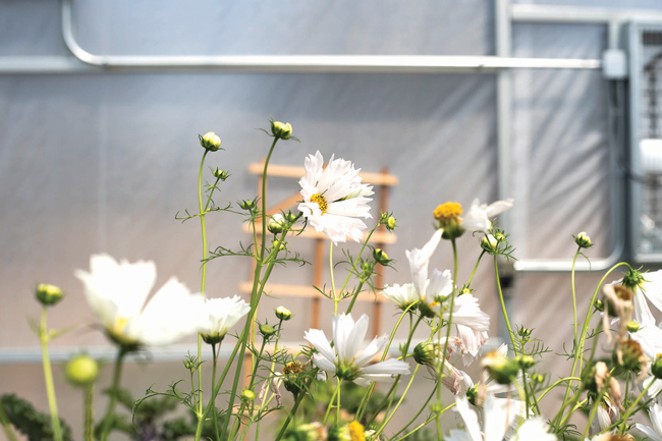 When I arrived at the farm, Shakti spoke to our group as we anxiously awaited entry to a large 30-foot by 96-foot greenhouse. Meanwhile, calming Indian flute music played, because the plants love the vibration, he said. The wait did not disappoint. Lush green vegetation filled the inside. A path of wood chips led through Hügelkultur mounds in the shape of spirals. This purposeful geometry creates flows of energies to encourage growth. Below the mounds a mulch of cardboard, hay and logs from local arborists combine to create a black soil so rich that earthworms were seen when picking up even one handful.

Mushrooms sprout in some parts of the wood chips, the fungus a sure sign of a healthy environment. Wildflowers such as poppies bloom outside along the borders of the greenhouse to attract pollinators. When the flaps are open they fly in and out freely. Companion plants are grouped together to create the most beneficial ecosystem possible.

Brian Ross, the manager, offered a treasure trove of information. Working in Phoenix, parts of Colorado and other climates, his passion for permaculture was obvious. An experimenter, he discussed the differences in California and Florida avocados, the seemingly endless varieties of herbs and greens, and other creative endeavors in horticulture. As he shared his knowledge, Ross picked a piece of this and that to taste.

“Yep, that’s dill,” and proceeded to give me a delicious-sounding recipe I would have never thought of with the herb.

During my visit, a group of younger kids and parents were also visiting. Shakti and Ross helped the children as they climbed atop the mounds to pick greens, carrots and other vegetables, hands and faces covered in dirt, veggies in their mouths. 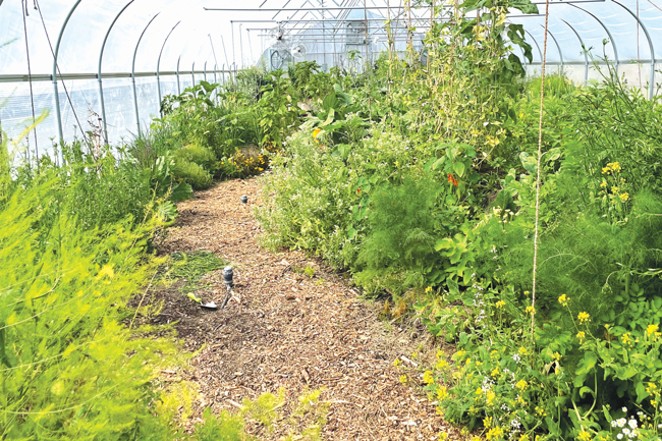 Scenes from Shakti Farm Design: A path of wood chips and all the bounty.

Outside of the greenhouse the property is also thriving. Shakti showed us a section with blooming fruit trees, each with its own crystal buried nearby to channel positive energy. Another area with nut trees was recently planted. Chickens, duck and turkeys roamed their own areas. In two small ponds, both crystal clear, minnows and koi happily swam. Amazingly, most all of these projects have been created within the last few years, a true testament to what can be accomplished with a vision.

Shakti wants everyone to experience and understand the importance of sustainable growth.

“The way in which food transportation and monoculture has been going on for decades has led to carbon emissions, depleted soil and less-nutrient-rich food. These practices are unsustainable.”

Many people would prefer to know the origin of their food, but greenhouses can be a significant investment of time and money. This is where Shakti wants to fill the gap. Customers only need to follow a three-word slogan: seed, feed, harvest. All the backbreaking work, from the excavation to construction and even to the planting, is taken care of by experts. Once a client’s greenhouse is up and running, they can do as much or as little as they like. Detailed guides and continued support from the Shakti Farms crew help maintain the structure and teach about growing.

After the tour I had planned to visit the grocery store, so luckily I had brought reusable bags. I left Shakti’s place with more than a few items from my list: fresh produce, herbs and some eggs. Most importantly, I confirmed my hope that growing in the High Desert is possible.